If you are using earned media value to show the impact of your PR program, please stop. It’s not the right metric to quantify earned media.

I started my career as a direct marketer. I’ve spent the last 20+ years using data to inform and optimize marketing programs. I’ve applied these same principles to my work in social media and content marketing. As a result, I have a pretty good understanding of measuring the impact of digital marketing programs, PR, and executing a media relations strategy.

But this post isn’t about what PR pros do day-to-day or my experience in this field. Instead, it’s about measuring earned media value and why it’s not a smart thing to do. Before we jump into it, let me first talk about Advertising Equivalent Value because it’s relevant to the discussion.

Industry pros have heavily criticized the metric for years, and it’s not used as much as it used to be. Although some still use their “go-to” earned media metrics, I would not recommend it for many reasons I’ll explain later. Many proponents of Advertising Equivalent Value have shifted towards Earned Media Value (EMV).

What is Earned Media Value (EMV)?

The official definition of Earned Media Value (EMV) is a metric that attempts to measure the value of earned media placement or story. The calculation assigns a dollar value to each placement based on ad rates in the same publication, channel, or program. Some have also used a paid search campaign as the proxy to determine an earned media benchmark. The definition and calculation of earned media value are identical to Advertising Equivalent Value.

Why is Earned Media Value Flawed?

There’s a reason why most PR pros don’t use earned media value to measure impact. Not only is it an outdated metric, but there are three main problems with using EMV to measure campaigns:

Let’s take a closer look at each of these challenges.

The biggest problem with EMV is that it focuses on outputs, not outcomes. Outputs are the number of placements you receive in earned media. Outcomes are the business results of your PR efforts.

For example, let’s say you’re trying to increase brand awareness of your company. Your campaign aims to reach as many people as possible with your message. In this case, output-based metrics like EMV might be a decent way to measure your program because the more placements you get, the more people will see your message.

However, if your goal is to increase sales among existing customers, output-based metrics like EMV won’t work. In this case, you need to focus on outcome-based metrics like sales, conversions, or web traffic from earned media placements.

Another problem with EMV is that it values all media coverage equally. This is a problem because we all know that coverage in The New York Times is not the same as in a local business outlet or a blog.

EMV also doesn’t differentiate between the type of coverage. Is it positive or negative? Obviously, a media mention in a positive article is worth more than a mention in a negative one, but EMV doesn’t consider that. It also doesn’t differentiate between a headline mention, pass-through mention, or a mention where you are mentioned, and your competitors aren’t.

All media coverage is not created equal, and the EMV calculation doesn’t consider that in the formula.

Finally, EMV is highly subjective. This is because the value of each placement is determined by the person doing the calculation. And, as we all know, people are notoriously bad at estimating value. This means that the EMV of placement could be vastly different depending on who is doing the calculation. This subjectivity is compounded because there is no standard formula for calculating EMV. Each person can (and will) use their method to determine a placement’s value.

So, what’s the bottom line? Earned Media Value is a flawed metric that should be avoided when measuring PR campaigns. If you’re looking for a way to measure your progress, focus on outcome-based metrics like sales or web traffic from earned media placements.

The Data Behind Earned Media Value is Also Flawed

The standard data point in measuring both Advertising Equivalent Value and Earned Media Value are impressions.

Most people calculate impressions using UVMs, which stands for unique visitors monthly. Most media monitoring platforms have integrations with SimilarWeb, SEMrush, or other web analytics platforms that provide this data type.

However, the UVM metric measures web traffic at the domain level, not the article level. This means that the article you secured is one of the thousands of web pages on that media site. I’m not sure how many people know this.

The below screenshot from SEMrush shows web traffic from Fortune.com being 17.4M total visits and 14.3M unique visitors in May. UVMs are “unique” visitors, which will always be less than the total visits because one person can visit the website more than once.

To illustrate this point further, let’s assume you have a product launch and your agency secured media coverage on Fortune.com. They sent you a report that suggests your media coverage in Fortune generated 14.3M impressions. It may look good on a PowerPoint slide, and perhaps your CMO may pat your back for a “job well done.” But, this is how impressions are calculated for both AVE and EMV, and it’s inaccurate.

Maybe now you can understand why this is a flawed metric. 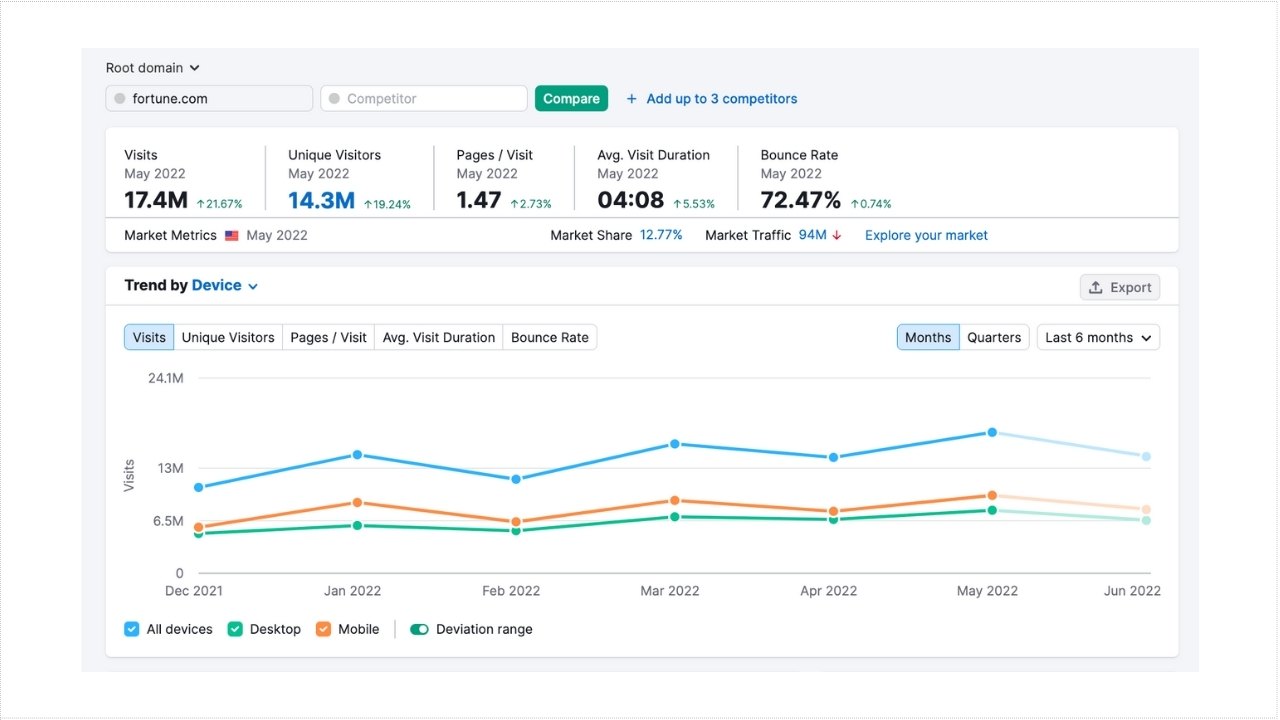 Impressions aside, let’s look at this from a different perspective.

I shouldn’t have to build or defend an argument that an article on the front page of the New York Times has more value than a full-site media buy.

If you agree with that, why would you compare a placement written by a trusted third-party source to that of a media buy? It doesn’t make sense to me because it diminishes the value and credibility of “earned media.”

There are media measurement platforms today that give interesting brand data, though. Memo is a relatively new media measurement analytics platform that provides web analytics directly from the publisher’s websites. In other words, if you get coverage in Fortune, Memo will give you unique visitors, referral websites, scroll depth, and other metrics at the article level. This is a massive step in measuring real earned media value.

The only challenge with Memo is that it can get costly, so it may not be ideal for smaller brands. Also, Memo only has partnerships with US media companies and is limited to only the more prominent media outlets.

Earned media value estimates what you would have paid for the same amount of impressions using some form of paid media.

To summarize, suppose you receive 10 million earned media impressions from a product launch. To calculate a value, you’d have to determine what you would have to pay in paid media to get 10 million impressions.

Let’s say your media plan tells you that it would cost $200,000 to get 10 million impressions in display advertising. In this case, the earned media value would be $200,000. Some even look at it as cost savings.

The main problem with this metric is that it compares apples to oranges. You’re measuring the value of an article written by a trusted third-party source and comparing it to the value of a paid media buy.

In addition, most people use web traffic data from web analytics platforms like SimilarWeb or SEMrush to calculate impressions. Still, this data is flawed because it only measures web traffic at the domain level, not the article level.

Even if you could accurately measure impressions, you’re still left with the problem of comparing earned media to paid media, which is like comparing apples to oranges. I always encourage PR pros to build up their marketing analytics skills. Doing so will ensure that you don’t end up measuring your PR programs using earned media value.

A: Marketing and advertising pros created the term “earned media value” to measure their earned media campaigns’ return on investment (ROI). It compares the amount of money spent on a campaign against the resulting increase in revenue or engagement.

Q: Why is it important to measure the value of earned media?

A: Measuring the value of earned media is essential for a few reasons. First, it allows marketers and PR pros to determine whether their campaigns are successful and providing actual business value. Second, it helps them allocate their budgets more effectively by targeting the channels that provide the best return on investment.

Q: What other ways to measure the value of earned media?

A: There are a few other ways to measure the value of earned media, though none are as accurate or reliable as the engagement or ROI metric. Other methods include article shares and engagement, web traffic from an earned media program, or assigning a monetary value to each earned media mention.

Data-Driven Communications is the Winning Formula for Public Relations