Scroll down to see the Brandwatch sentiment analysis of the Lebron James hype of joining the LA Lakers back in 2018. 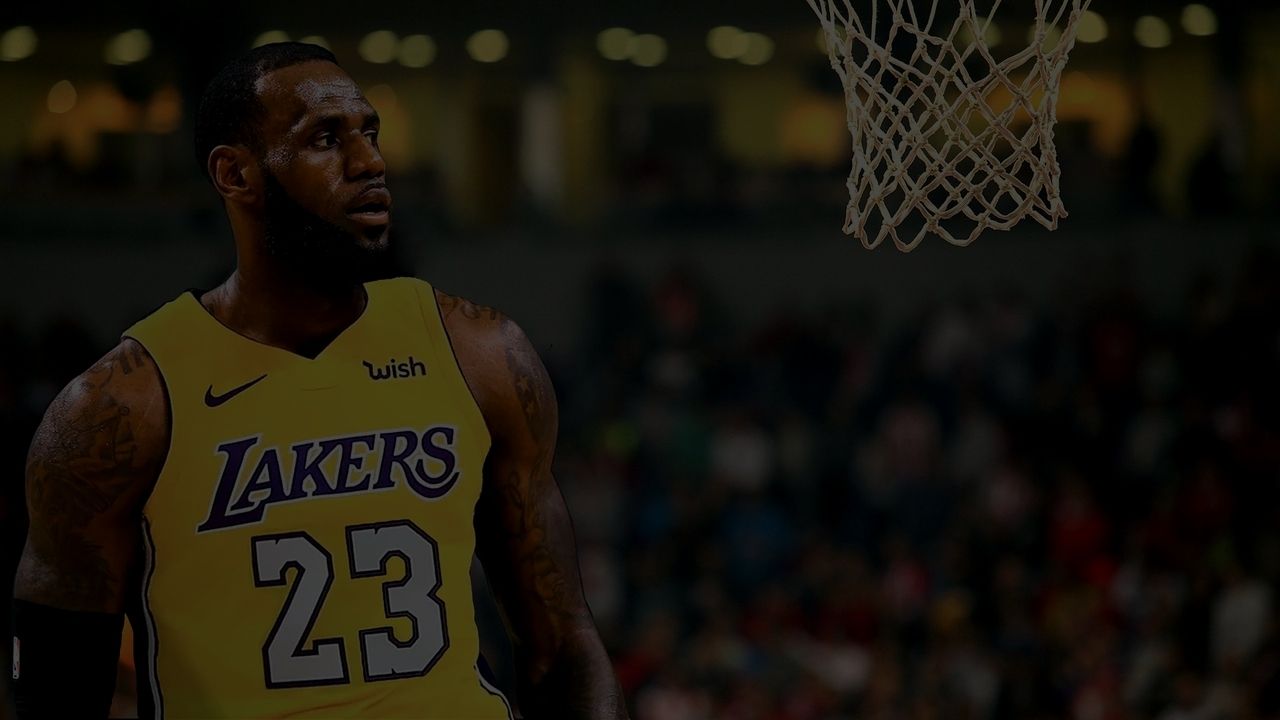 Do you ever wonder what people are saying about your company online? Are you curious if customers are happy with your products and services? If so, sentiment analysis may be something you want to consider to fully understand the context of the conversations.

What is Sentiment Analysis?

Sentiment analysis is the process of identifying and measuring the emotional tone of a text. It can be used to gain insights into customer sentiment, track brand reputation, and more. This is important because it can help you make decisions about how to improve your products and services, as well as understand what people are saying about you online. Brands started using sentiment analysis to track customer sentiment a few years ago, but it has become more popular in recent years with the rise of conversations on social media.

How to Do Sentiment Analysis

There are a few different ways sentiment analysis can be performed. The most common method is through the use of natural language processing (NLP). This involves using algorithms to analyze text and identify sentiment. Another way sentiment analysis can be done is through manual review. This is where people read and analyze text to identify sentiment. This method is often used for smaller data sets.

Sentiment analysis can be performed using various tools and methods. If you’re interested in trying it out, there are a few things you’ll need to do first.

Sentiment analysis is a powerful tool that can be used to gain insights into customer sentiment, track brand reputation, and more.

I’m a Lakers fan. And I’m hyped that King James has joined the squad. I watched Sportscenter for most of last night because I was in shock and still wasn’t sure it was true. My social media feeds blew up with my Lakers posse posting their pure excitement about the King and our quest to get more rings. Others (mostly Warriors fans) criticized the move, probably because they are scared that LeBron moved out west.

All this conversation prompted me to look at some data. I did a Brandwatch sentiment analysis on the last 3 months of conversation about LeBron joining the Los Angeles Lakers. Since March 30th, over 1 million social media posts (Twitter & Instagram) and news articles combined. You can see the distribution of conversation below – Twitter dominated the discussion with a significant amount of news coverage too.

I also looked at Brandwatch sentiment analysis to try and understand the mindset of the folks posting about LeBron and the Lakers. Honestly, I didn’t spend much time drilling down because the data scientists over at Crimson do a pretty good job at clustering/hand-coding the language and emotion. Here’s what I did find after 20-3o minutes of reading through the content, trying my best to filter out the trolling:

I love seeing Lakers fans rally behind the decision and I’ll be tracking the conversation volume when the season starts, and when we make the finals next year too! Below is more on the Brandwatch sentiment analysis and more data. 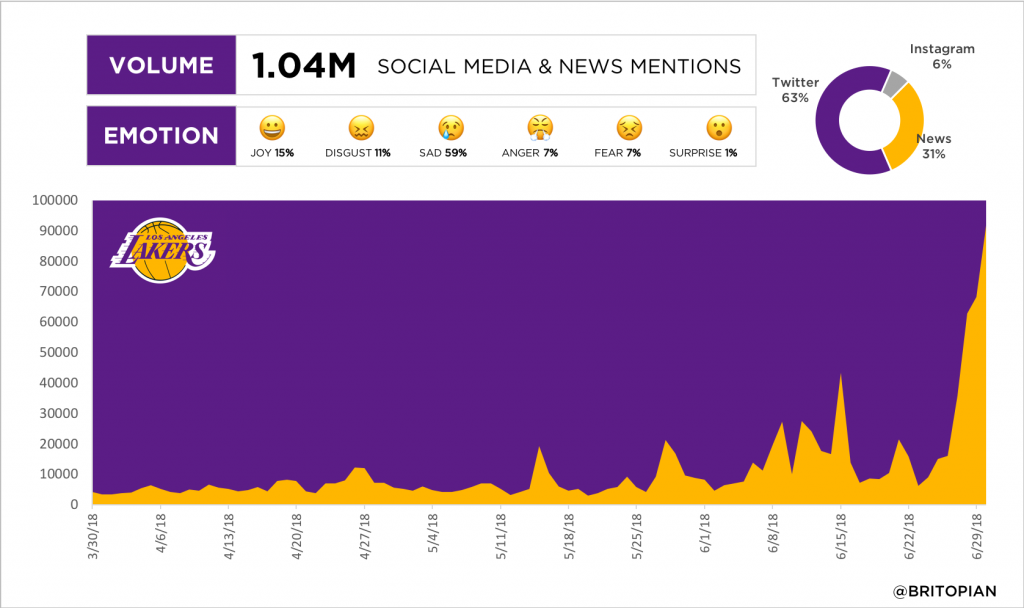 Since I am surrounded by Warrior’s fans and they were in a similar Brandwatch sentiment situation with Kevin Durant a few years ago, I wanted to compare Kevin Durant’s announcement from back in 2016.

Clearly, there’s more volume but I was surprised at the lack of news coverage about KD joining the Warriors (only 8%). Twitter clearly dominated and the conversation there was similar to that of what happened with the decision last night–joy from loyal Warriors fans and of course, “haters gonna hate.” I fell into that ladder category. This is a really smart way on how to increase brand awareness on social media.

In reviewing the emotion and sentiment analysis, here’s what I found about the KD announcement: 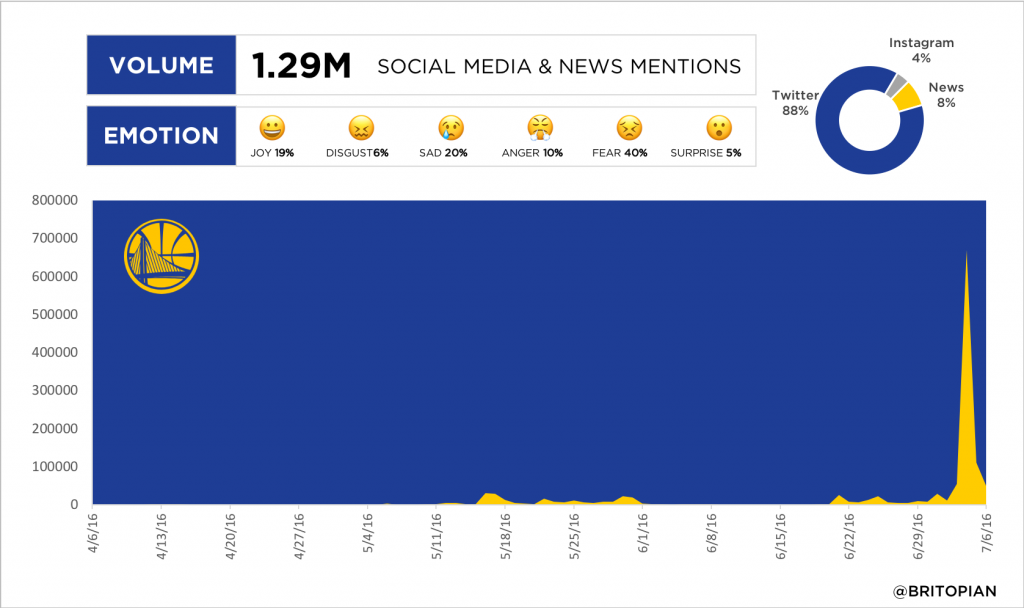 I am a biased Lakers fan, but at the end of the day, KD’s announcement generated more buzz (less news coverage) than what transpired over the last 3 months. Brandwatch is one of many social media listening tools that you can use to content analytics like this. Hope you enjoy this post and for more insights like this, please subscribe to my Youtube channel to be the notified when new videos are added.