Below is a quick analysis I did on the top cybersecurity influencers. But are they the top influencers?

Ask any tech marketer how they measure influence, and you won’t get the same answer twice. This isn’t a bad thing. Influencer intelligence should always be the first step, and there are many variables to influencer measurement. These data points can be weighted differently based on goals, objectives, the industry, and the audience you’re trying to reach.

Another reason I do this is because of granularity. For example, in my research, malware influencers differ from SecOps (DevSecOps, SIEM). So, categorizing influencers in the high-level topic of “security” isn’t as actionable.

I say all this because I wanted to experiment.

I Googled “top security influencers” and found several results of influencer lists. Most of them were from security software vendors (here, here, and here), a B2B tech marketing agency, Marketing Envy, and one from Onalytica — an influencer identification and management platform.

Of each list, one consistent security influencer made the top five – Brian Krebs, who owns/operates Krebs on Security, and he appeared on 4 of the five lists. Bill Brenner appeared on two different lists. Here’s a quick breakdown of each list (only the top 5 noted):

I’m not sure what kind of math, if any, was used in calculating these lists. It could have been just a ploy to get the attention of said influencers, which isn’t a bad idea if done right. I see this too much from the content marketing and social media industry, which bugs me. Let’s move on.

Over the last several years, I have spent a lot of time building and analyzing audiences online. One audience, in particular, is the IT and business audience. This is important on many levels. You’ll see why.

I rarely account for influencer reach (or influencer follower count) when doing influencer research. Instead, I look for whether or not specific influencers are referenced (or mentioned) by a particular audience. In this case … a real, self-identifiable audience made up of people that matter, like security engineers, developers, architects, heads of security, etc. This, to me, should be weighted when measuring influence.

In tech, security influencers consistently reference each other on social media. This happens all the time. They tweet an article, tag another influencer, add their handle in the Tweet, flood with hashtags, and then everyone retweets. I’m not saying this is terrible, good, or whatever. It’s just what they do.

I want to know which influencers are referenced by a specific audience or group.

At Zeno, we have built an audience panel of 200,000 IT decision-makers (and growing). We can filter and mine their sharing habits, conversations, media consumption, brand affinity, top interests, etc. This is all publicly available data.

For this exercise, though, we just filtered for each influencer above. In other words, I wanted to understand if any of the above influencers are reaching more than just other influencers. I needed two questions answered:

Here are the results.

The four influencers below were not mentioned by anyone from this IT security audience from June 2018 to July 2019. Most appeared on the Data Insider list and one from Onalytica. Again, I’m not saying that they aren’t influential. They just aren’t being mentioned by this particular audience panel.

The others, well … were mentioned quite a bit.

This data shows that Brian Krebs was mentioned 17,570 times during this date range and from members of this audience, resulting in ~11M impressions. Interestingly, while Shira Rubinoff was mentioned less often than Brian, those mentions resulted in almost double the impressions.

Of the security influencers in this analysis, the following have been mentioned or referenced in the below media publications or have published bylines:

Ok, so what? Let’s dig into this a little more and get some clarity.

These security influencers have been mentioned in some very reputable media publications. The next question is whether or not our security audience reads these publications and at what frequency. The CASB Gartner Magic Quadrant is a good starting point.

We cross-referenced the audience to see if they were reading and sharing content from these sites to answer this question. The data shows that they do. 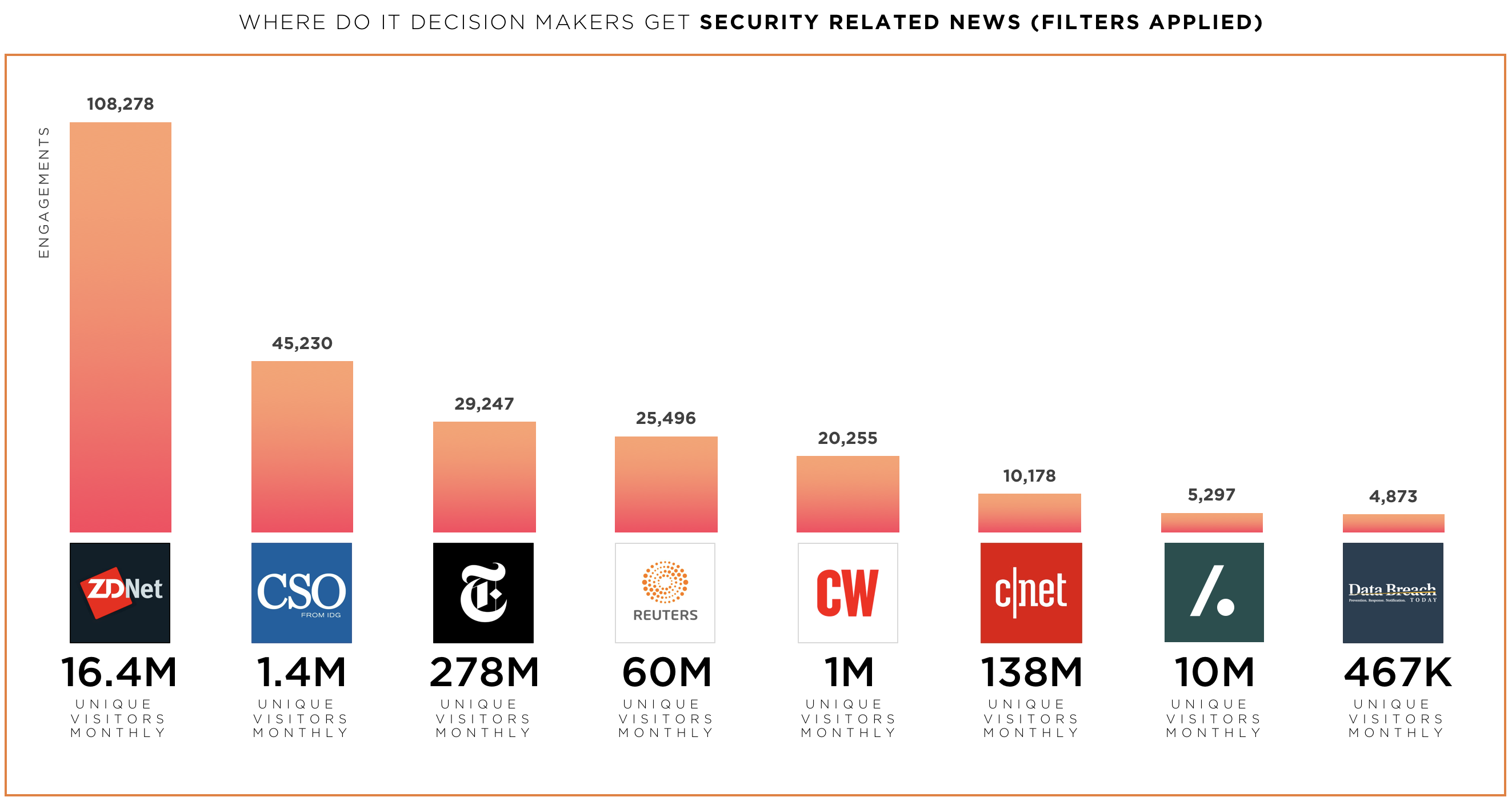 Analyzing the sites in the data set shows that our audience prefers to read ZDNet 2x more than CSO Online and 3x more than the New York Times. The engagements represent this audience’s total number of social actions (likes, comments, shares, retweets, inbound links). Again, we only looked at the media where influencers were mentioned over the last 12 months. No other sites were considered in this part of the analysis. I’ve also added UVMs for each media publication. The data is meaningless, but it looks good.

So, it’s safe to say that our influencers could reach security audiences in those specific media publications.

A couple of notes.

The answer is yes. And here they are: 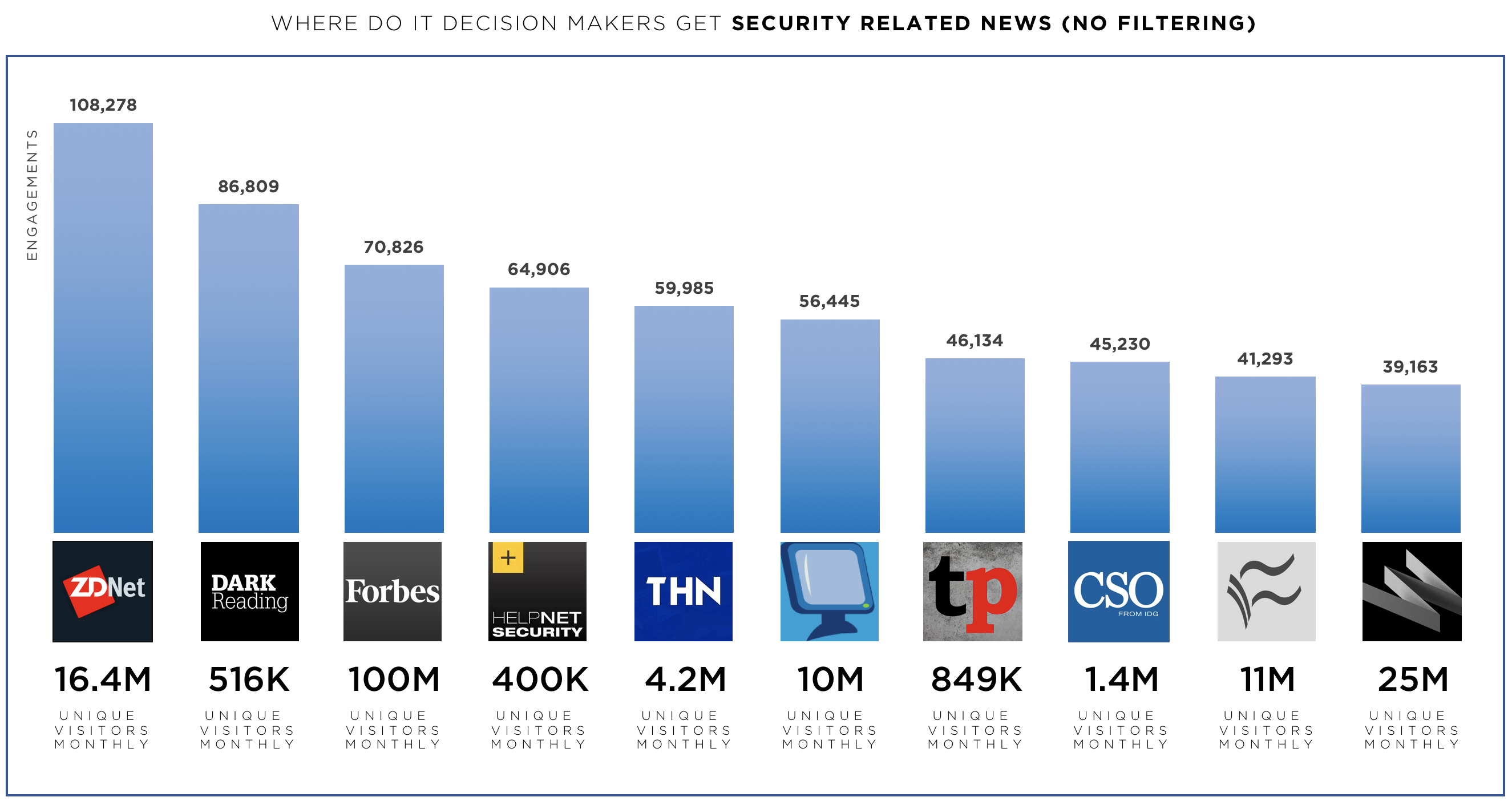 These are the top 10 media publications that security pros read when consuming security-related content, with no filtering whatsoever. You’ll notice some commonalities with the above graph, specifically that ZDNet is the most consumed media publication compared to all other security publications.

As you can see, influencer research is a subjective practice. It requires an understanding of your business, marketing goals, and KPIs. So the next time you visit a list floating around on the internet, be skeptical.

But there’s still an unanswered question. Are these the top influencers in the enterprise security space? I honestly don’t know since our data sources were based on five existing influencer lists, nothing more. So perhaps that’s the next post.

It’s not good practice to manage influencer programs in a silo. Instead, ensuring that your program is fully integrated into your larger B2B social media marketing plan is better.

A multi-segment marketing strategy must start with the foundation of audience analytics, data, and consumer insights

18th May 2020
[VIDEO] The Age of Influence Book Review
Video

This Age of Influence Book Review covers the top insights from this book and why it’s important for marketers to read and learn from it.

These cloud influencers are leading the conversation around cloud strategy, hybrid and security. Learn more about who they are.