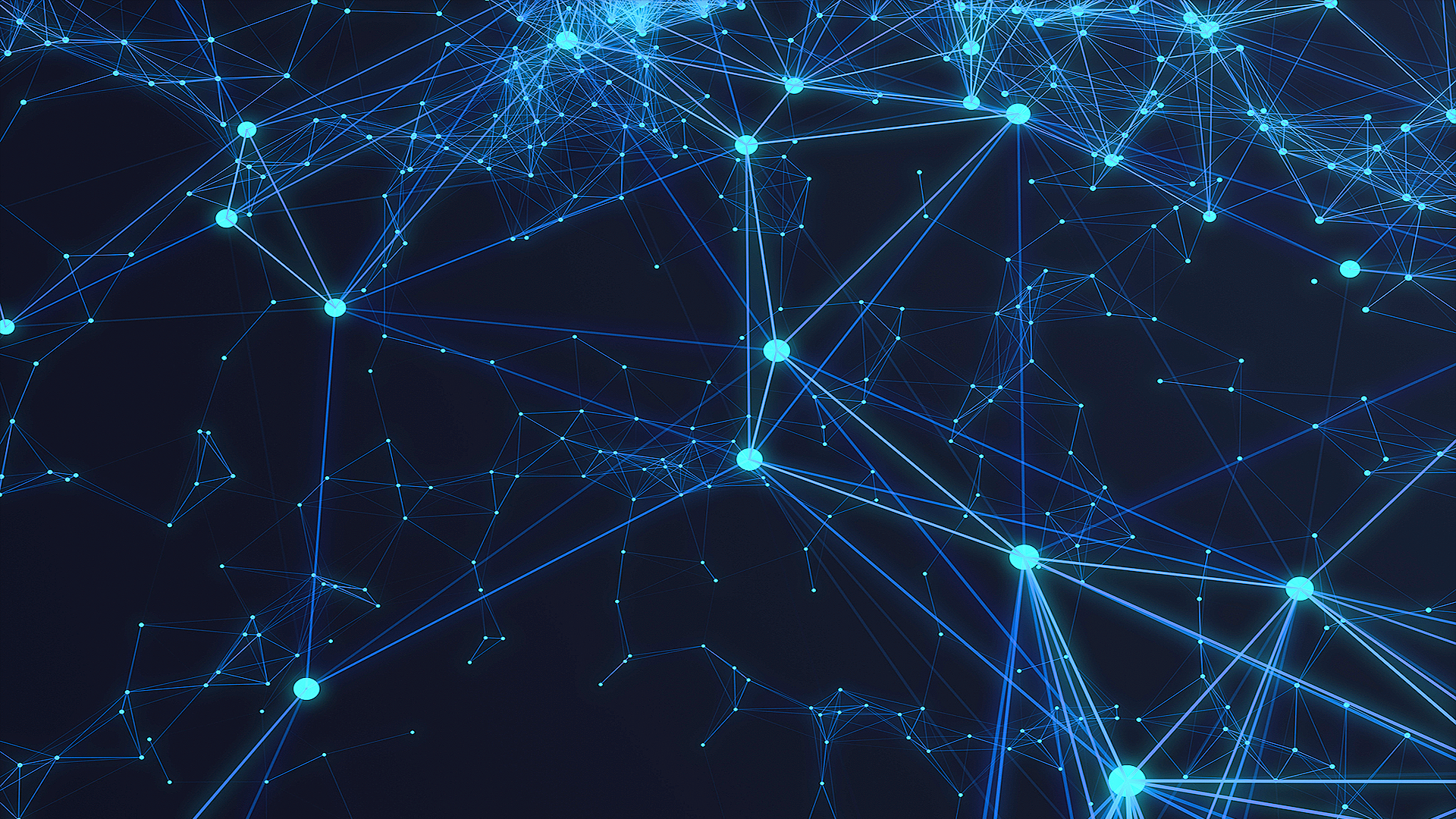 In this video, I talk about using data-informed influencer profiles and the value it brings to marketing and communications programs. Enjoy the video and subscribe to my Youtube channel to be the notified when new videos are added.

Unedited Transcripts Below (from Microsoft Transcribe)

So what I’m going to do is walk through one example of an influencer profile. It’s not a real influencer, it’s not real data, but I want to show you the components that are important for you to make some actionable decisions. I’m also going to go through a couple of graphs to show you how you can track and uncover insights from a group of influencers over the course of time so you can predict certain trends. You can also see what types of trends are declining based on data and again as I said earlier, it’s public data that’s available to pretty much anybody on the Internet as long as you have the right tools and the right platforms and the time to spend mining that information.

OK, so jumping into this example, we have Michelle Gomez an she is not a real person. She’s not an influencer in this context, and we have a profile here.

And there’s a lot of information on here, but it’s really important to dissect each one because each one has a purpose. Now in the upper left hand corner is basically her name, how large her network is and how large her network is by channel, and this is important because as you think about an influencer profiles and activation program, you might decide to launch a specific program on Instagram, Twitter or on LinkedIn, again based on her usage, right? If she spends more time and has a larger community on Twitter, that might be the channel that you want to engage with her through organic influencer marketing. Now on the right we have topical relevance and this is basically a cluster audience analysis and it’s based on the topics that are most relevant to Michelle.

So each of these boxes represent volume, so the larger the box, the larger volume of her conversation. So she talks a lot about future workplace HR, technology, digital transformation, and employee experience, and you can see that within each of those boxes there are little sub boxes or smaller boxes. So those are subtopics.

The way to read this is if you look under future workplace she talks a lot about gig economy, remote teams, HR technology, flex, working huddle, room zoom etc. And obviously it’s COVID-19. So it kind of makes sense that she would be talking about these types of topics. Now. Again, these are words that she’s using in her language on social media, whether it’s Twitter Facebook or LinkedIn, these are things that she talks about the most.

You want to be as relevant to these influencer profiles as possible, so the only way to do that is through speaking the language that they speak. OK, I’ve said this many times before, and by the way, these keywords there’s probably hundreds, if not thousands of keywords within each topic, so this is just again the top, I guess. 11:50 topics and subtopics.

Literally, when you export into Excel, there’s thousands of rows of data and they’re all words in language that influencers are using. OK now moving down to the bottom right hand corner. These are people who are influenced by Michelle. OK, so just based on influencer mapping. And I I did a video on this. I think last week, but these are people she’s connected to. 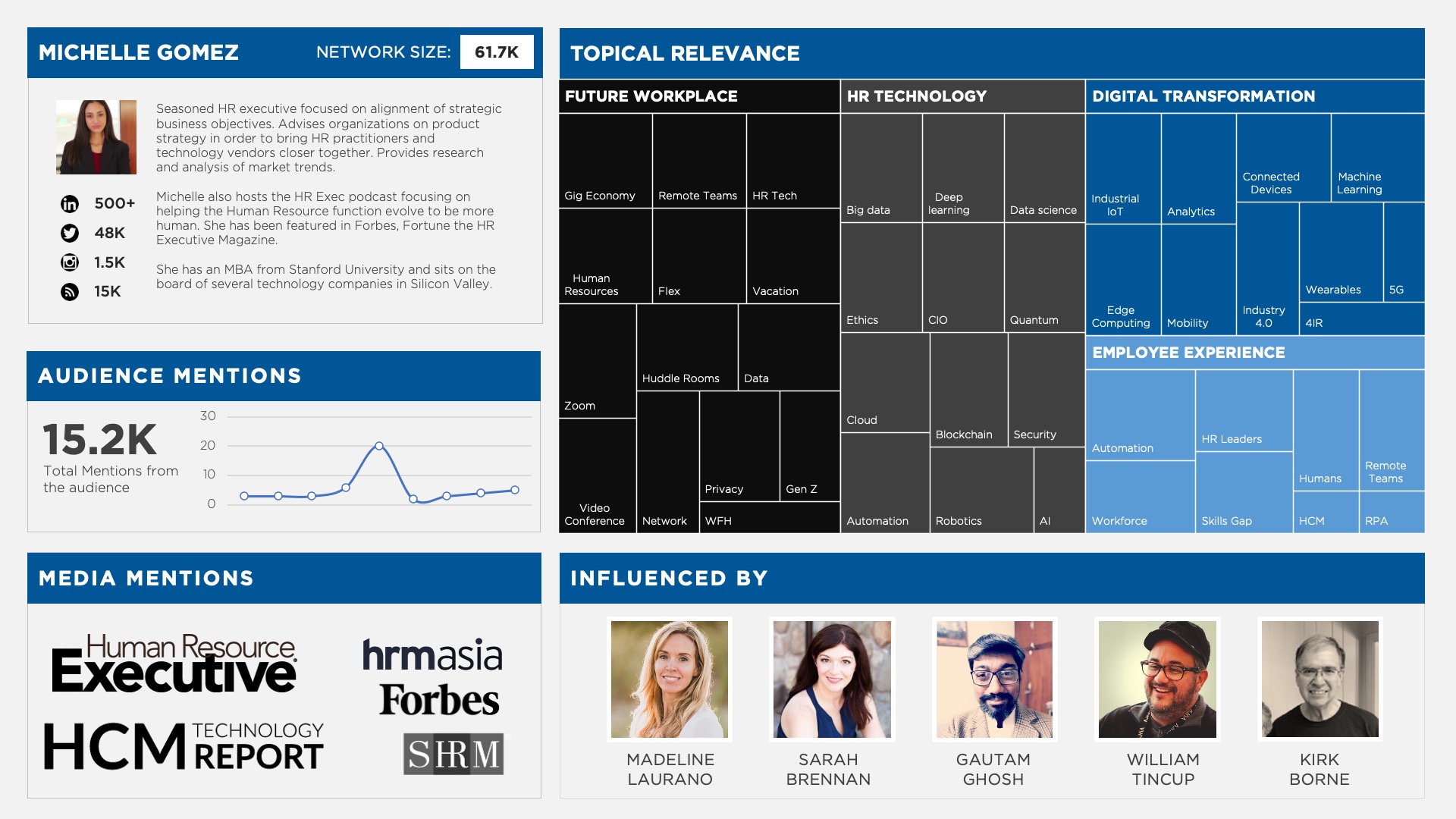 These are people she influences and it’s pretty easy to find that information right. It’s just based on how often these individuals are sharing her content, retweeting her commenting on her content and other other data points. But it’s really good to know who influences her so that you can figure out. OK, if she’s not returning my phone calls, or she’s not engaging with me on Twitter.

Maybe I need to engage with, you know, William or Kirk or Madeline, and in an effort to surround sound Michelle Gomez with with content that’s either mentions our company name or at least is you know some relevance to her so that she can start to, you know, wonder who you are and maybe engage with you now on the bottom left hand corner is media mentions. Now this is important because.

When I talk about measuring influence, it’s not just about how large their community is or how much engagement they they get from their content. I always ask the question. OK, if this is an influencer profiles, is she mentioned in the media by traditional medium? So is she mentioned in articles or she publishing bylines? I mean in this case she is.

OK, and this data point is what I would call reference. So is the media referencing Michelle, and in this case she is more importantly this last box. Here is audience mentions. Now I talk a lot about audience intelligence an I think it’s probably the most important data point that you can account for as it relates to you know marketing B to B marketing etc because.

If you can, if you can build an audience, there are so many things that you can extract in order to, you know, define programs and campaigns and you can test the relevancy of influencers. And that’s what we’re doing in this case. So imagine you have you know she’s an HR executive, right? Michelle Gomez. Imagine you have an audience of you know, 15,000 HR professionals.

People who work in HR in staffing in benefits, etc. There you know having conversations online and by the way, there’s thousands of these people who exist now you have. You have an audience of let’s just say again, 15,000. What you can do is you can cross reference Michelle Gomez and her handles her anything that she’s published online her name.

How often she is being mentioned or referenced by a particular audience. Now if you’re an HR software company, you shouldn’t really care how many mentions she gets from the world. You need to care how often she’s being mentioned and or referenced by people that you want to sell 2K. Because if if your audience in your customers or future customers. 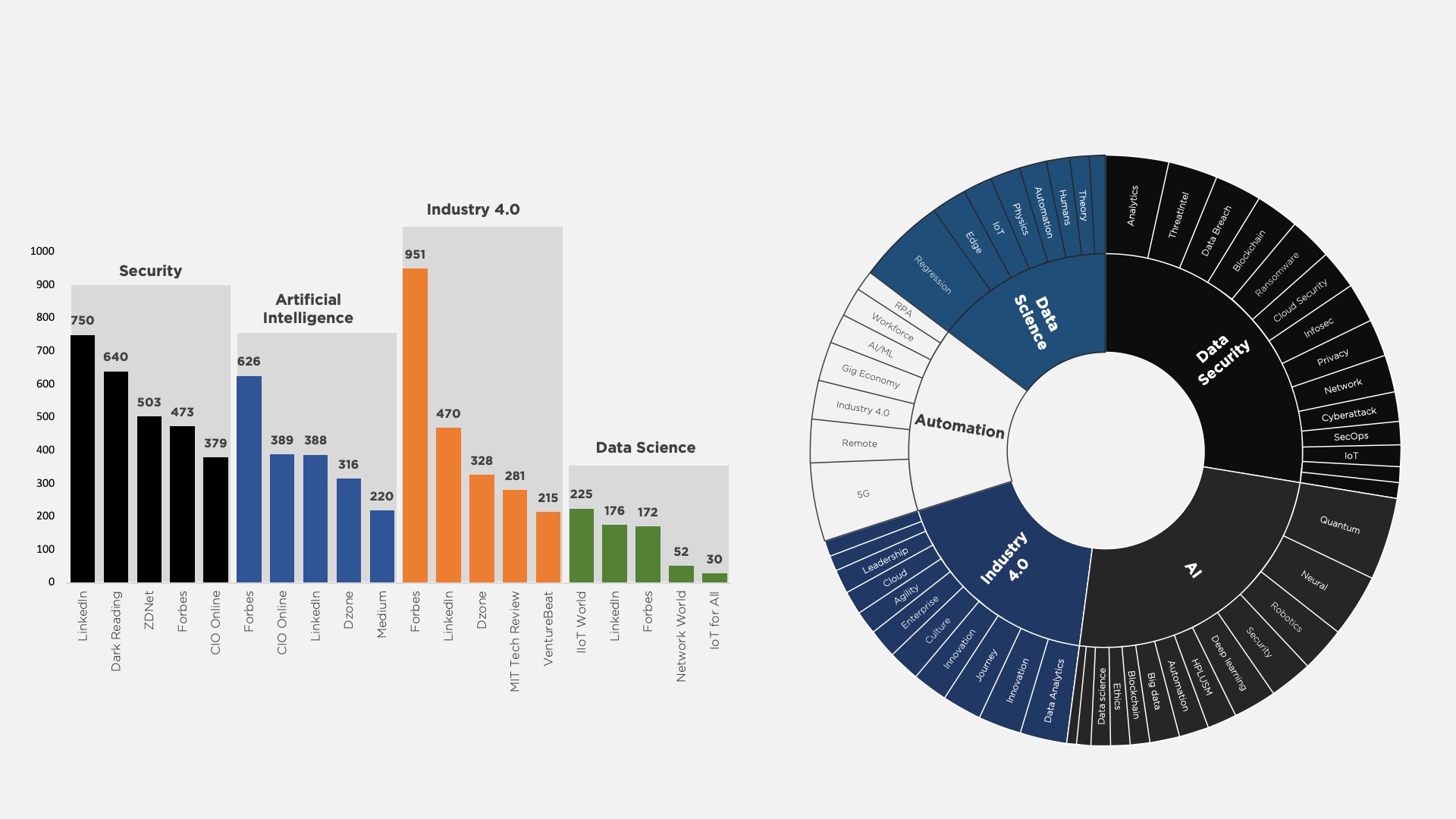 Are mentioning Michelle and you can get Michelle to engage with you publicly and maybe through some type of paid program. Then all of a sudden you’re reaching a very, very unique and targeted audience with third party validation. In this case, it would be an influencer like Michelle Gomez. OK, so now we’re going to transition into looking at influencers as a group. So imagine, for example, that this is.

The top 20 influencer profiles in the security industry. OK, so the top 20 influencers who are either traditional media or non media analysts you know or not consultants? What have you? These are people who are influential within the topic of security. Now let’s start with the conversation analysis on the right, very similar to what I just showed you at for Michelle right Michelle, that was her content that she’s publishing as an individual.

Automation and data science. Now, even within this sub topics of each of these topics you have things like Analytics, threat, intelligence, data breach. Again, these. Just to reiterate, these are the keywords and phrases that this audience is using publicly, right through all kinds of channels. Whether it’s you know publishing on their blogs, on Reddit, within forums, on social media.

OK, so that’s important to understand as a group. What is important to them on the left? This is basically cross referencing content with media habits or media sharing. So for example, when the group of influencers again as an aggregate, are talking about security or sharing content related to security, these are the content sources that they’re sharing from the most. 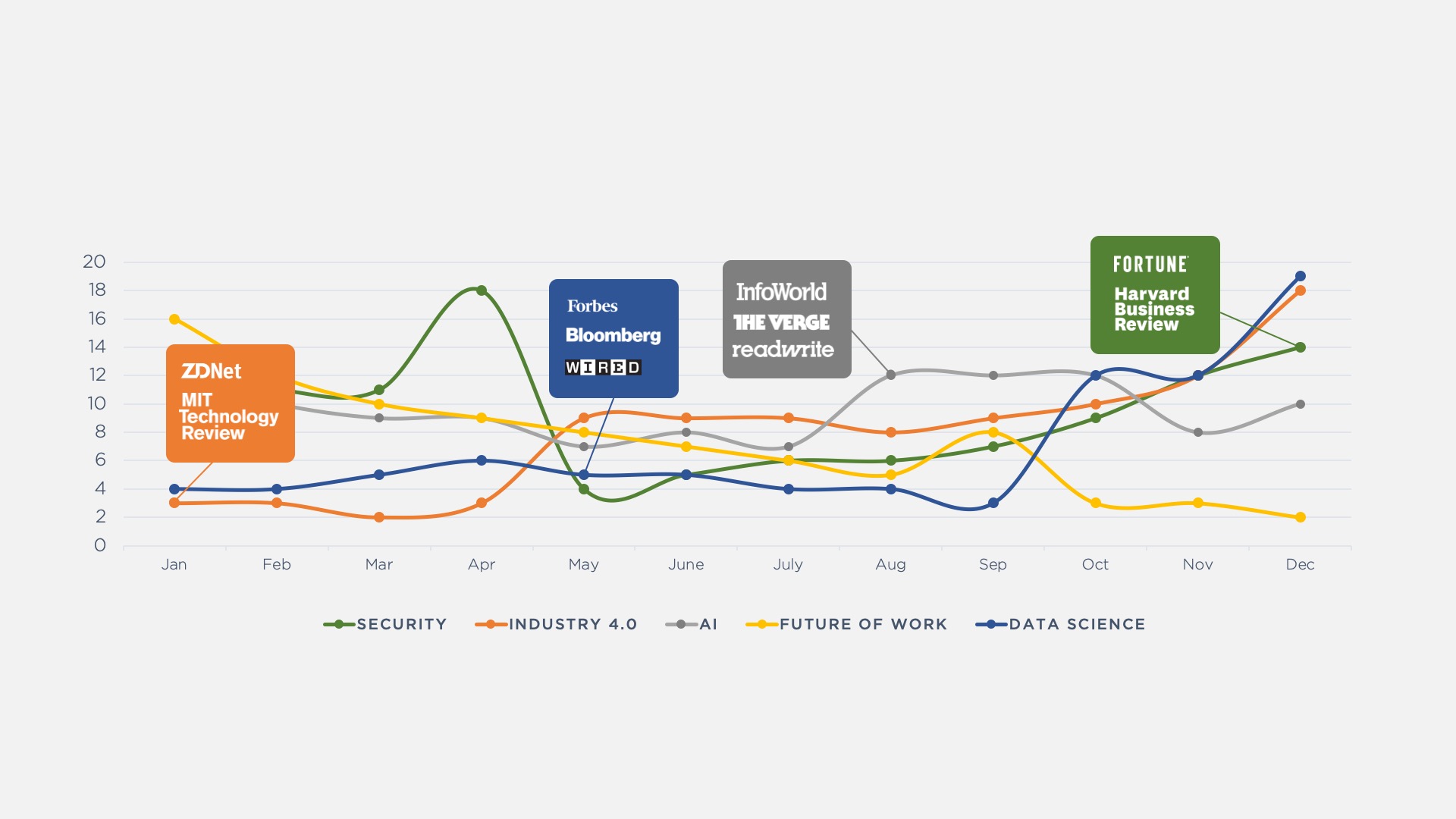 So LinkedIn, dark, reading, ZDNet, etc. An and when you do that, you can start to, well, there’s a lot of things you can do right. You can give that intelligence back to your PR team to say look if we want to reach these influencer profiles who are in fact reaching our audiences. And we’re a data science company. Well, then we need to focus on these five channels down here right in order to not just reach our influencers. But.

Reach the audience, so again, it’s it’s very actionable in that it’s not just counting numbers. It’s not just you know or counting numbers overtime, but because you have to spend time and begin to think about strategically how you can use this data to inform a program and or a campaign, or just the day-to-day drum beat of media engagement and influencer engagement.

Again, whether it’s organic or paid, now again, same concept is just a Top 20 influencers, but we’re looking at overtime. What are the topics that are most important to this audience now these are the same topics by the way, from the previous screen security industry. Ford. Oh, you know AI etc. Now you can see from January up into you know.

December the industry 4.0 is as a topic is growing in demand right? These are that topic in itself is demanding the attention of this audience. In this case influencers. Whereas future of work was really high back in January. It’s declining. You can see you know. Security in general is kind of all over the place.

And you know AI etc. So this is a way to kind of predict the conversation of influencers, and that’s important so that you can think about how you can start to leverage and build your own content, leveraging the keyword and the phrases that influencers are using in order to be relevant. Now my my next video I’m going to talk about how to use.

I love it, but even when you’re talking about five 1015 influencer profiles and start to analyze them as a group, that’s audience intelligence. Whether the group is 15 or 1500, you are analyzing and clustering large datasets of content, conversations and behavior in order to find some insights in order to take action from now. One of my favorite tools is Onalytica. 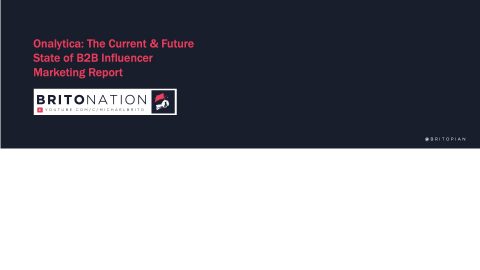 5 Considerations When Working With B2B & Tech Influencers in 2020