The History of Traditional Media

From the birth of “newspapers” to the dawn of digital media, traditional media outlets have had a fascinating history. The beginning of journalism lies in newsletters and broadsheets, which were distributed throughout Europe as early as the 15th century. Over time, these became newspapers available to larger audiences, including political debates and classified ads.

It wasn’t long before the first journalist took it upon himself to be more than just someone who writes articles, but also one who investigates and is accountable for what he writes. As a result of this mindset, a new journalistic standard was formed called “New Journalism” or “The New Journalism.” One of the central tenets of this philosophy was the belief that a journalist should not just report facts but also provide a first-person account of the events as they unfold.

With time, major newspapers gained prominence and survived many challenges, from government censorship to competition from radio and television. In fact, some believe this diversity has been the reason for their survival.

Until the digital age, it looked as though traditional news outlets would be around forever. Although they still command some of the largest audiences and publishing rights, the internet has started to chip away at their stronghold on information. Within a few years, internet users have found that staying updated is not just as easy as picking up a newspaper but also more convenient.

With a few keystrokes, one can read about the latest news stories from all over the world and share those that they find interesting on social media for people to consume as well. Although traditional news outlets have not been replaced by this online revolution just yet, it is only a matter of time before the digital age entirely takes over the way we receive daily news.

What is Traditional Media?

It’s essential to pay attention to traditional media. It’s an integral piece of an earned media strategy and requires a PR professional to pitch stories to journalists to get coverage about a product, service, or any announcement. In addition, traditional media publications often have a high readership, several million unique visitors, and high SEO value, which means that getting coverage need to be a priority to your earned media strategy.

There are many types of traditional media outlets. For example, consumer and lifestyle publications like People, Vogue, and Cosmopolitan write about various topics like culture, fashion, and celebrities. Some outlets focus on financial news like Forbes, Fortune, and Money. Technology publications like The Verge, VentureBeat, and Gizmodo write about artificial intelligence, cloud computing, and virtual reality. And lastly, there are also news publications like the New York Times, CNN, and Wall Street Journal regularly cover business-related stories.

There are other examples of traditional media that need to be addressed, primarily if you work within a specific vertical or industry.

For example, there are vertical publications like HR Magazine, Management Today, HR Zone, and People Management in the HR industry. These media outlets don’t have the same readership or online footprint as other traditional media outlets. However, if you secure a placement in one of them, you’ll know for sure that your media coverage is reaching the right audience.

The Basics of Traditional Media Analysis

PR professionals use several different metrics when they’re trying to assess how well their company is doing in earned media.

Did you get coverage or not? This measurement is the easiest and most basic way to measure the effectiveness of public relations. While it’s valuable to know which media publications you’re getting coverage in, it’s also important to remember that the size of the media outlet doesn’t necessarily correlate with its impact.

Coverage by large outlets like the NY Times. This is the holy grail of media measurement because this type of coverage can mean widespread awareness and positive associations with your brand. You get bragging rights anytime you can get coverage in the NY Times. You should print out a hard copy, frame it, and hang it in the company lobby.

Personal connections with journalists. This is not really a tactic when measuring media, but there is a correlation between media coverage and your personal relationships with journalists. Never underestimate the importance of personal connections to secure media coverage. This is true in every industry, but especially in the world of PR, where pitches are generally met with rejection most of the time. If you’ve cultivated a good relationship and rapport with a journalist, you’ll be much more likely to get your pitch picked up than if you were pitching someone you have no connection with whatsoever.

The number of media opportunities available. This media measurement approach is a little less straightforward because it entails looking at the total number of story opportunities available in your industry and then requires you to track performance against your competitors. If you can show an increase over time, this shows growth for your business. Or, maybe you just hired a rockstar earned media strategist.

Increase in web traffic. Traffic isn’t the best indicator of media analysis for many reasons. First, tracking is difficult because most journalists do not link their articles to your website. There is software available that can help augment web traffic from earned media sources, but it could get expensive. Secondly, most likely, you have other marketing campaigns and programs that are happening, so it’s difficult to isolate whether web traffic is coming from an ended media story or a marketing campaign.

Over the last few years, I’ve been working on this model to articulate PR teams’ journey with traditional media analysis. This model isn’t necessarily sequential. There are many variables to consider, like the size of the company, the vertical, whether it’s multinational, and the sophistication of the marketing, PR, and analytics team.

The model is broken down into four phases: 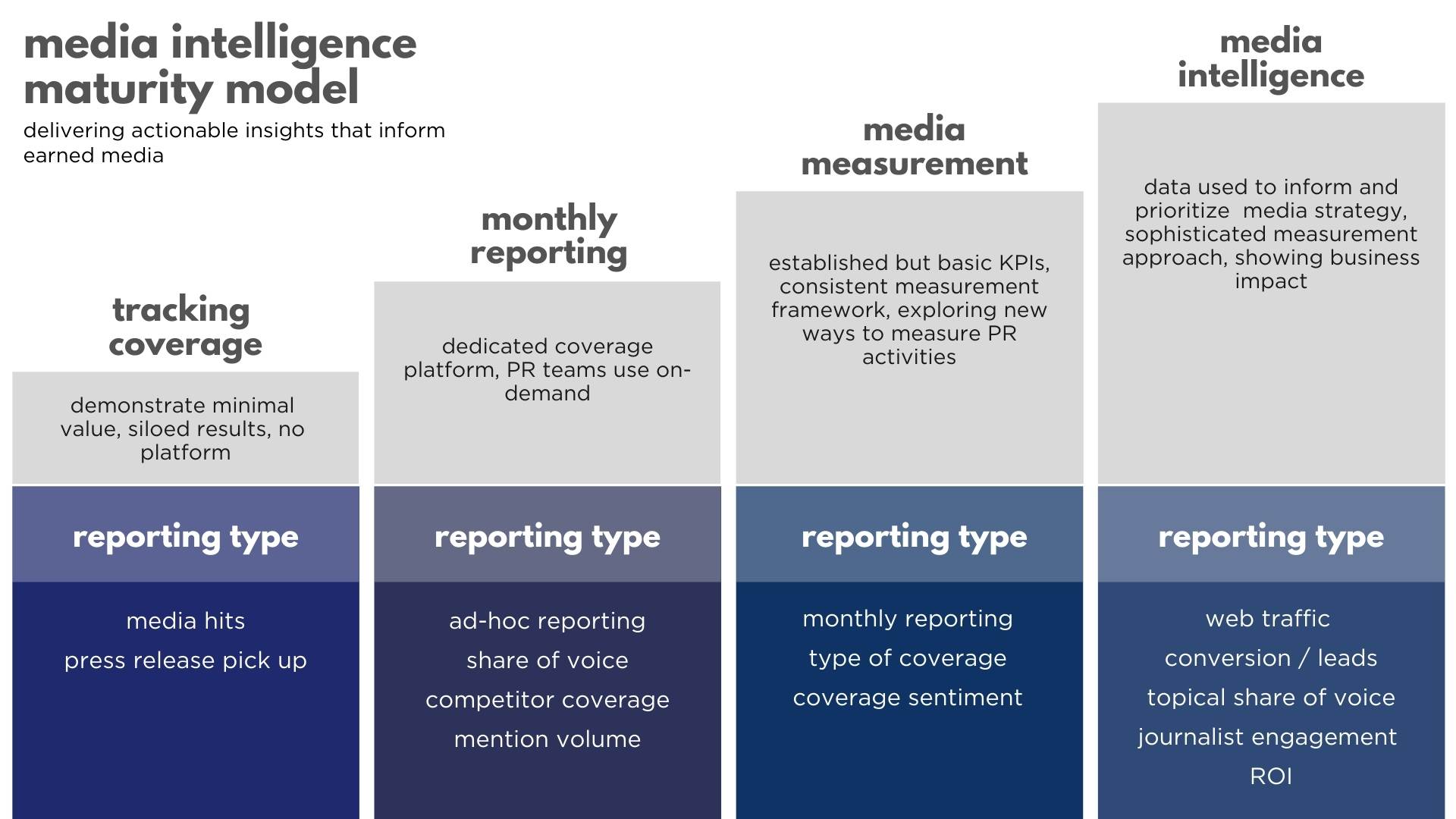 Tracking media hits is counting numbers. All you need is a calculator, a pen and a pencil. It’s adding up all the “hits” that your company may get within traditional media outlets and adding it to a PowerPoint slide. Oh, and please don’t say “hits” anymore.

In this phase, companies are receiving little to no value from their work in traditional media relations. This may happen for a few reasons. Either they don’t have the expertise, don’t know what they are doing, or just don’t care.

The teams are most likely doing a Google search, clicking on “News” and manually adding articles to an Excel spreadsheet, and sending them off to the client. This is the absolute bare minimum in traditional media analysis. If you’re currently in this phase, you should be looking at up-leveling your media measurement efforts or hiring a new PR firm.

Most of the companies in this phase of media measurement use a tool or media measurement platforms like Meltwater, Cision, or Muck Rack, to pull earned media coverage. However, they most likely only access the platforms at the beginning of each month to pull last month’s coverage data. So often, I get asked about my take on Meltwater vs Brandwatch, and for the most part, they are equal in terms of capability. I do have my favorites, though.

Companies in this phase are likely using the “off the shelf” reporting that these platforms provide to their clients. Example reports might be a basic SOV analysis, competitor coverage, or tracking mention volume month to month.

This is the phase where the fun starts and innovation happen.

More advanced brands are doing media analysis and exploring new ways of measuring media effectiveness, impact and exposure. They are going beyond the approach of just “measuring media impressions” to quantify their work with storytelling and traditional media relations.

They are most likely logged into the platforms daily, talking with their account managers, and sifting through reports to find media insights.

As brands become more sophisticated in using data to inform media relations, they will find themselves doing more comprehensive media analysis of industries and topics to uncover hidden narratives. This is a form of media intelligence.

Some brands will analyze specific business media outlets like Forbes, Fortune, or Bloomberg individually to understand the impact each one has when they write about particular topics relevant to the brand.

Most of the companies in this phase have PR teams driven by data. They are consistently trying to innovate, find new vendors, and leverage internal and external data sources to quantify the value of media measurement.

This is an example of a media analysis. In this instance, we correlate three different data points and plot them on one graph. We are tracking earned media coverage about a specific topic, but the same methodology could be used when monitoring brand coverage. 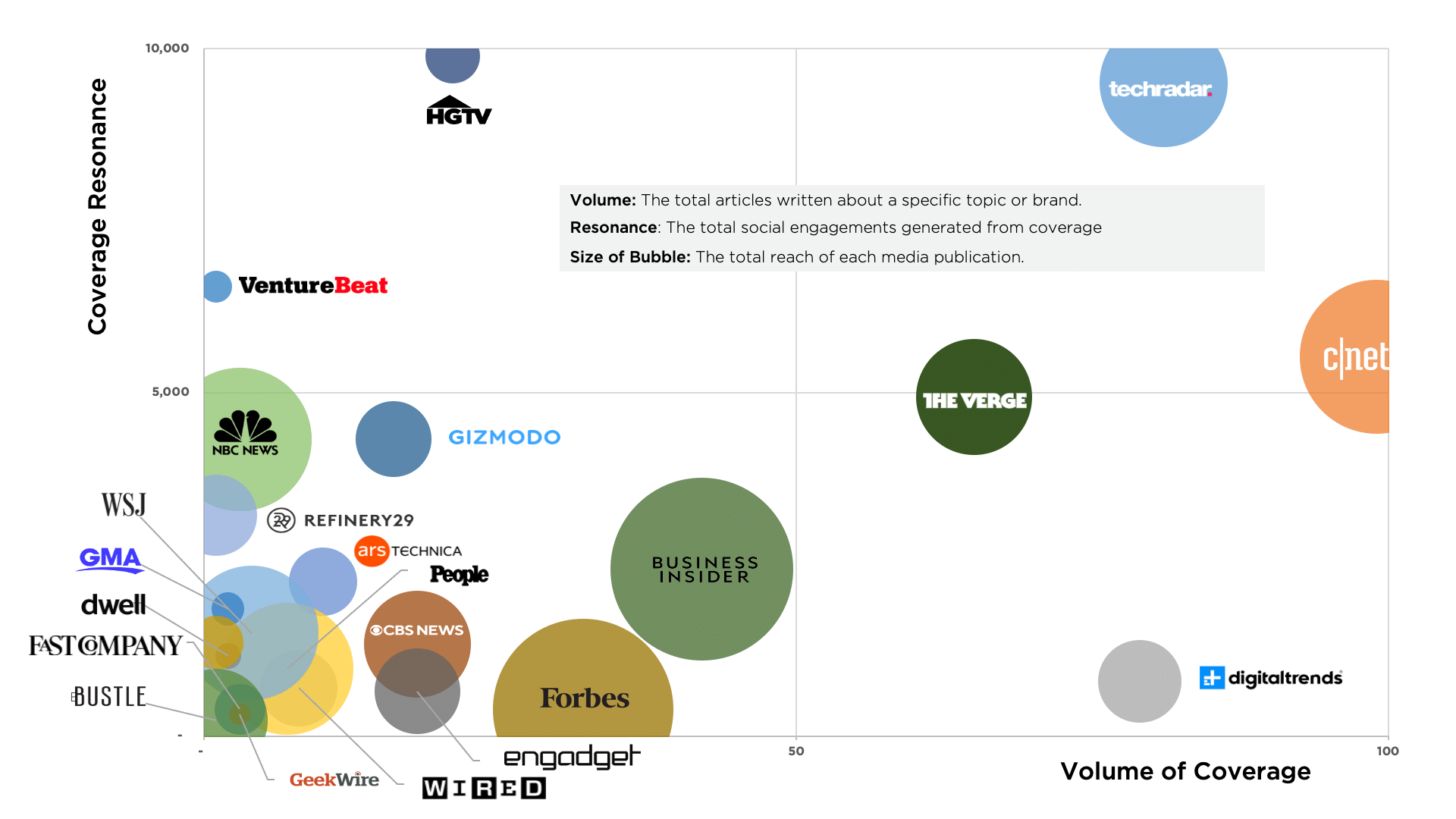 The last data point plotted on this graph is the bubbles’ sizes. These represent the total reach of each publication, measured by their unique visitors monthly (UVMs). I am not a big fan of looking at UVMs in isolation, but when you correlate that data with volume and engagement, it paints an interesting story on where you might want to prioritize your earned media strategy.

What is the difference between traditional media and earned media?

Is media analysis and media intelligence the same thing?

It depends on who you ask. Media analysis is more about analyzing what’s in front of you. In this case, a set of data points or an excel sheet with all your previous media coverage. Media intelligence is an action that happens before you even start pitching. It involves upfront research to identify the right media publications that can impact business. Then, it helps set the earned media strategy.

Do you need to be a data scientist to excel in media measurement?

Absolutely not. I failed high school algebra twice, and I still use percent change calculators online. The great thing about media monitoring platforms today is that they do the math for you. There will be a slight learning curve because you must learn how to create queries, pull reports, and slice and dice data.

Media measurement tools can get expensive. They are considered enterprise software and can soar into hundreds of thousands of dollars per year. However, other, smaller players in the space can help pull media coverage and do the basics of PR reporting.

What are some media measurement tools available on the market?

I really hope you enjoyed this content. I do my best to create content that’s actionable and provides value to the work you do.

Please consider subscribing to my YouTube channel, and be sure to hit the notification button so you can be notified when new videos are uploaded. You can also connect with me on my other social media channels if you like.

Data driven media communications and media is critical for PR pros to reach their target audience with the right stories at the right time.

When social media analysis is combined with primary research, the data is more insightful and actionable for marketing and public relations.

26th Nov 2021
Brands On Clubhouse? Well, It Depends Who You Ask.
Article

There is an opportunity for brands on Clubhouse to build community, and activate employees, influencer and customers to be storytellers.