When Elon Musk announced that he would buy Twitter for $44 billion, the internet went into a frenzy. Countless headlines were speculating why Musk would make such a bold move, and there were countless tweets debating whether or not it was a good idea.

In any case, free speech has come up as a significant issue in the wake of Musk’s announcement. Many people on the internet have expressed discontent with this and claim that Musk will censor content that he disagrees with or doesn’t align with his worldview.

Others have argued the opposite. Many on the conservative side have been making accusations for years that Twitter already censors conservative voices, deletes their followers, and limits the reach of their content. They argue that Elon’s acquisition of Twitter would benefit all voices across both political spectrums solidifying Twitter as the social media platform where free speech is the bedrock of communication.

It’s still unclear how this will all play out.

I’m less interested in the “Why Elon Musk buying Twitter is such a big deal” or the free speech headlines. It’s good clickbait, but I am more curious about the audience having the conversation.

The below data is a quick snapshot analysis of the social media conversation related to Elon Musk, Twitter, and the buyout. I was curious about who was having the conversation and what they said.

It’s interesting to see the demographic breakdown of the audience. The data shows that 34% of the conversation are females, and the most important topic of discussion within this conversation is Trump.

The cluster analysis also shows that most of the online conversation was highly opinionated. You’ll see an extensive discussion revolving around free speech outside of sharing news articles about the acquisition. The media can drive narratives and manipulate audiences into these conversations. 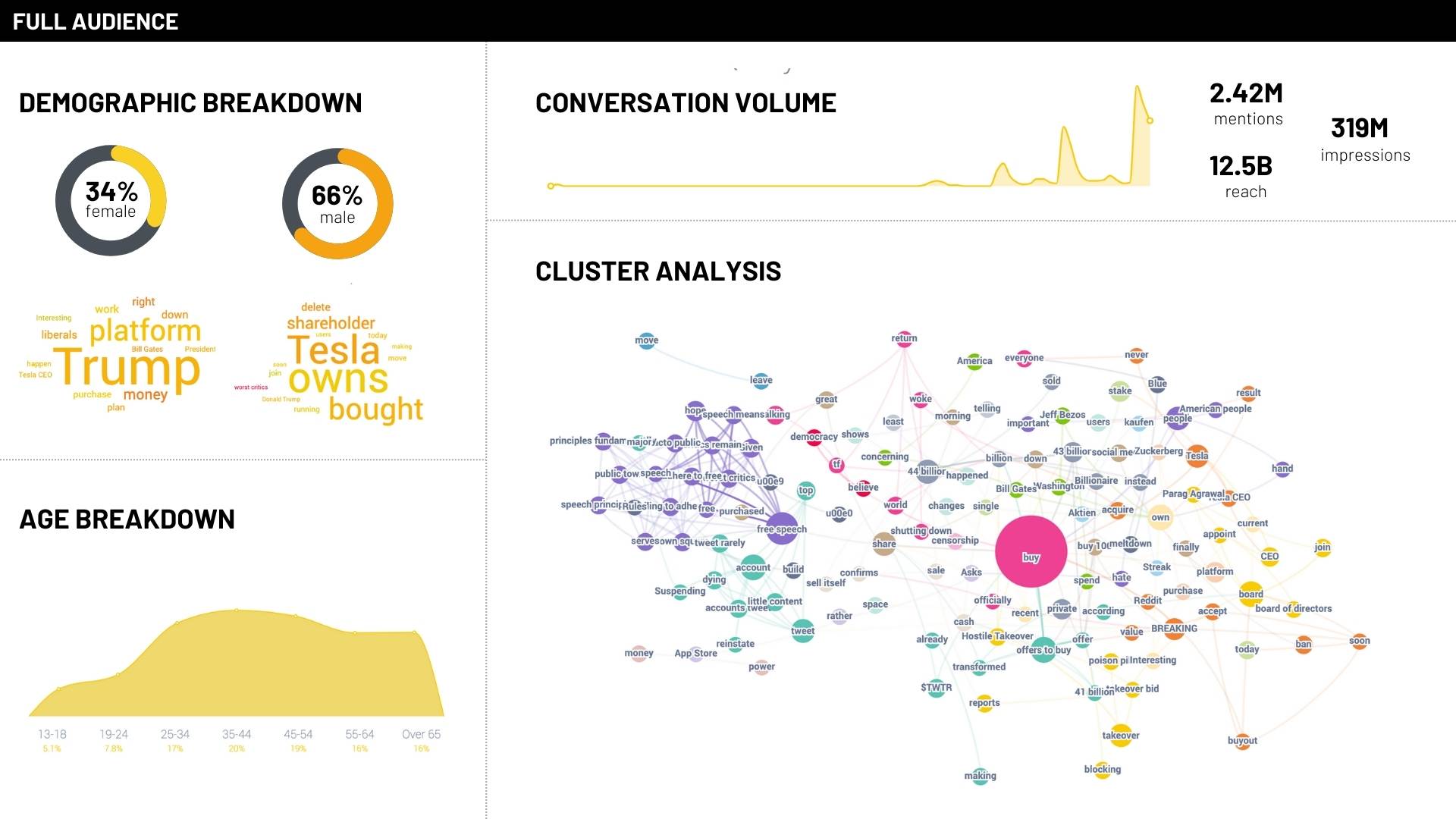 Any thorough analysis should segment data and isolate certain variables to generate better insights. In this case, I wanted to understand the conversation between liberal-leaning audiences and conservative-leaning audiences. I added a bio search filter using different variations of the following keywords:

The below data represents the left-leaning audience. One of the initial insights I realized, especially compared to the larger audience population, is that this audience is 58% female, compared to 34% of the total audience.

This audience is not happy with Elon Musk buying Twitter. Many have said they were going to cancel their account and not use Twitter anymore. Part of the reason they are fearful is that Elon Musk will reinstate Trump on the platform. Also, as I was digging through the data, many of the profiles are Twitter employees.

Another fascinating insight is that both the liberal-leaning and conservative-leaning audiences also skew older. For example, the data shows that 31% of the audience is 55 and 64. 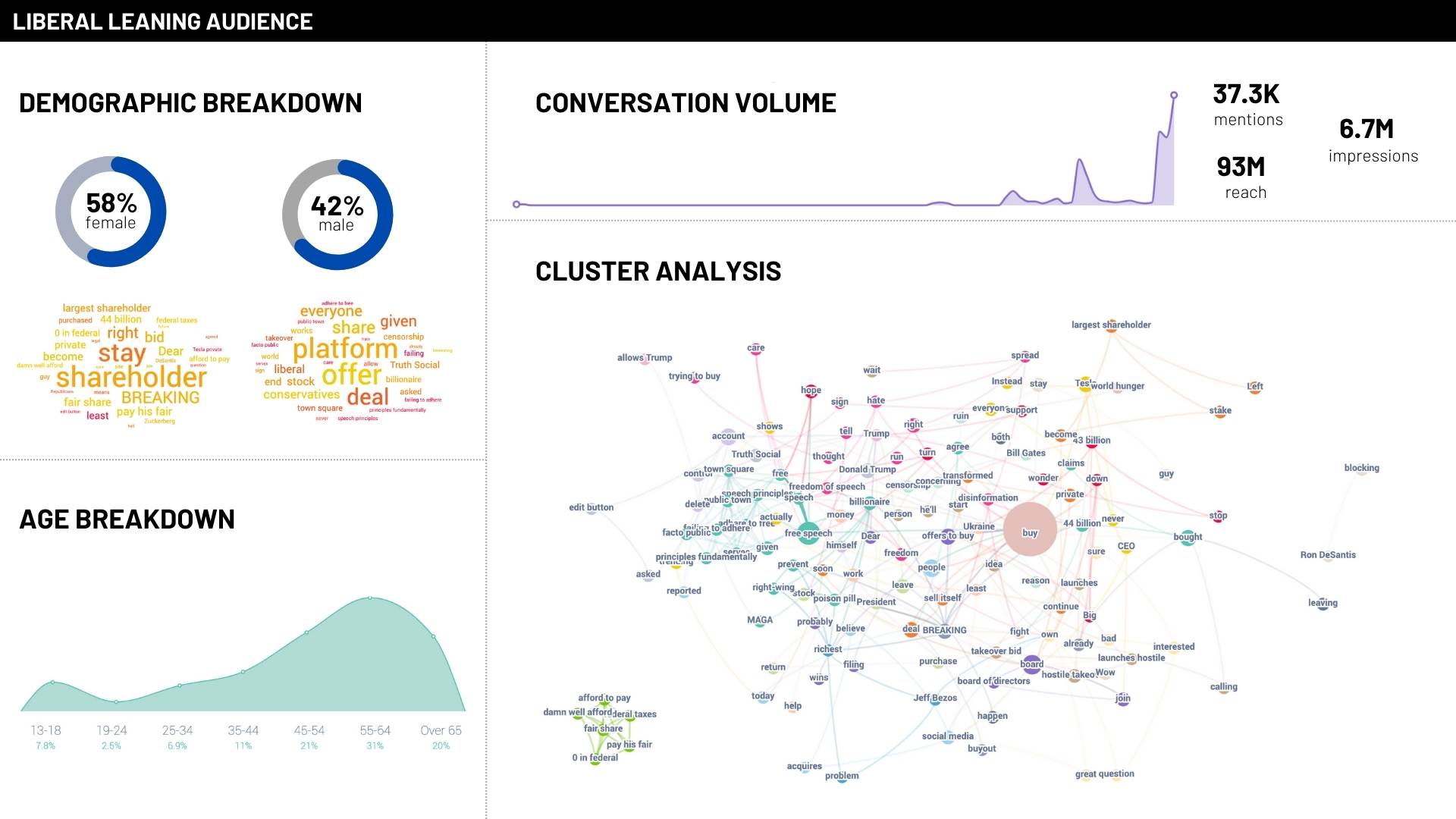 The conservative-leaning audience matches more of gen pop from a demographics standpoint, but the conversation is very different. Free speech is also an important topic of interest, but the context is much different. The conservative-leaning audience believes that Elon Musk will have fewer restrictions with Twitter moderation, giving all political viewpoints equal reach and visibility. Many are also praising that Donald Trump will get reinstated on the social media platform. 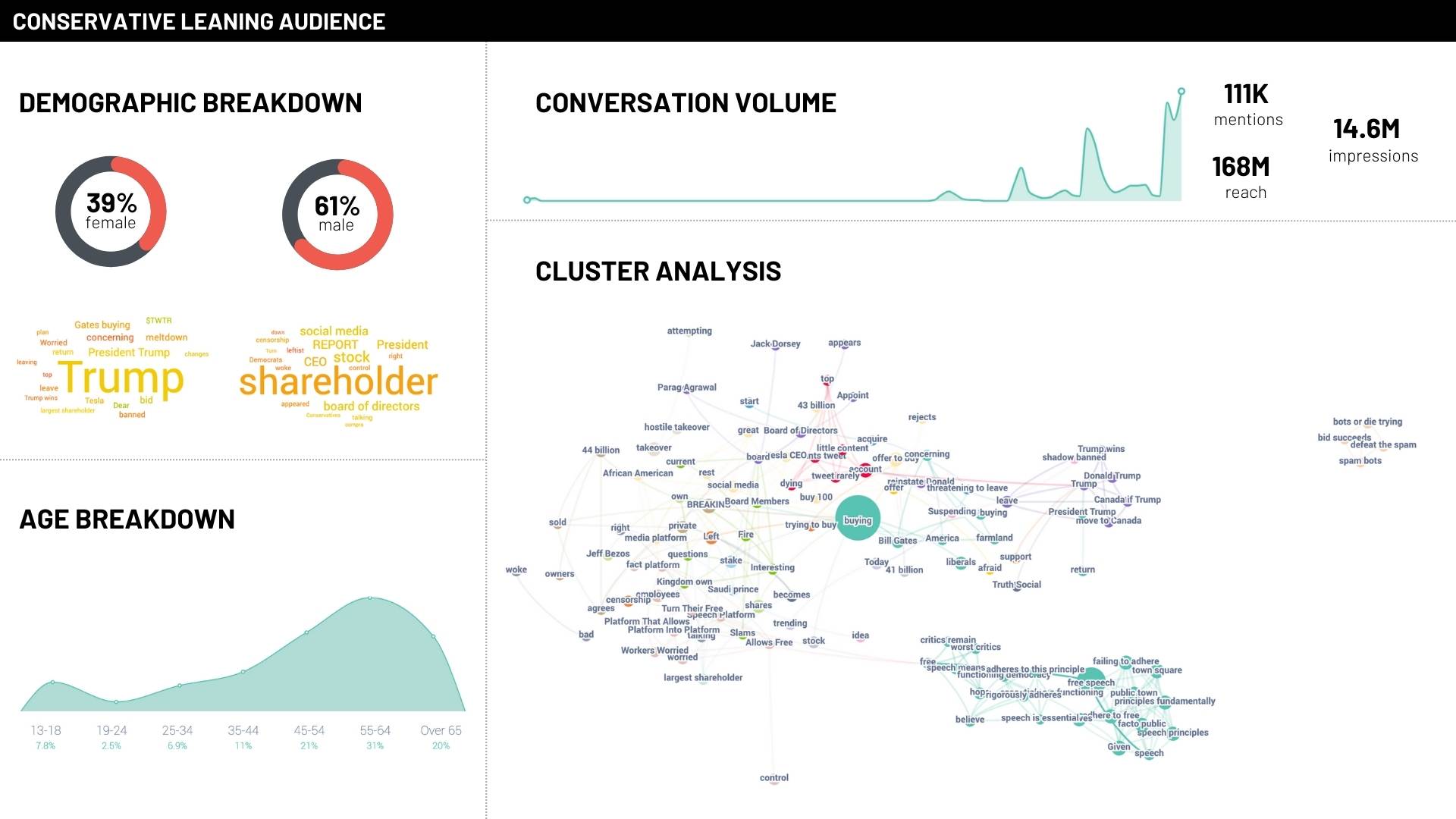 This last piece of data I find the most interesting. It’s not that insightful because it’s what I expected, but the fact that Infegy can track and plot sentiment, emotion, and conversation volume is intriguing. The data below represents looking at the liberal audience, conservative audience, and everyone else talking about Elon Musk buying Twitter.

There are two graphs below, and each one has three data points. Along the X-axis is sentiment-the percent of conversation that is either positive or negative. The Y-axis is a passion score.

Infegy’s passion score considers sentimental phrasing intensity, subject focus, and sentimental ratio. Passion is a computed score based on statements used from the boolean query. For example, “I just waited in line for 2 hours to buy my new iPhone!” is more passionate than “I just bought an iPhone.”

The passion score is based on similar language, the occurrence, and the difference between positive and negative usage of keywords used on social media. This means the higher the percentage of sentimental mentions from the query, the more likely the overall passion score will be higher. Higher passion scores correlate to more enthusiastic and emotional conversations.

The last data point is volume and considers the total mentions of the conversation. 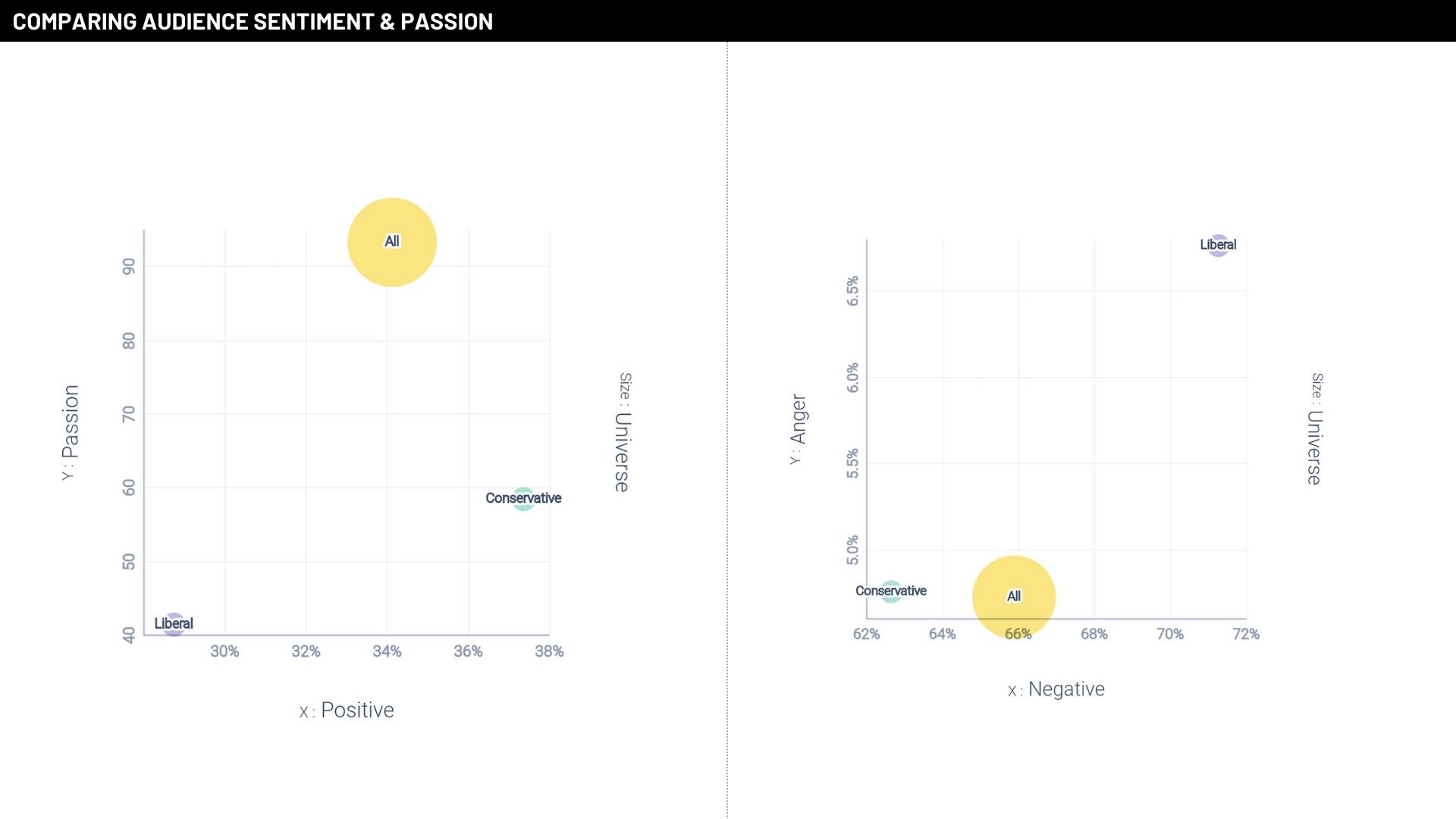 So the best way to interpret the graph on the left is like this: The conservative audience is somewhat passionate about the announcement and has a much higher positive sentiment when compared to the liberal audience and everybody else.

The graph on the right is similar but different. The X-axis is focused on negative sentiment. The Y-axis is an emotion, specifically anger. And the size of the bubbles also represents the volume of conversation, like the graph on the left. So the best way to interpret the data is like this: The liberal audience is highly negative about the Elon Musk acquisition and is also very angry.

Regardless of your political stance, it’s clear that political world views influence just about every “non-political” trend, topic, and news headline of the day. This is evident given the news about Elon Musk buying Twitter.

The meme below was posted by Elon Musk was a hot topic of discussion. My interpretation of this is that Elon Musk has not changed where he stands politically since 2008. What he’s showing is that progressive politics have moved far left, making it appear that he is right of center. There’s a lot of public discourse and discontent about this meme causing heated arguments from both sides. 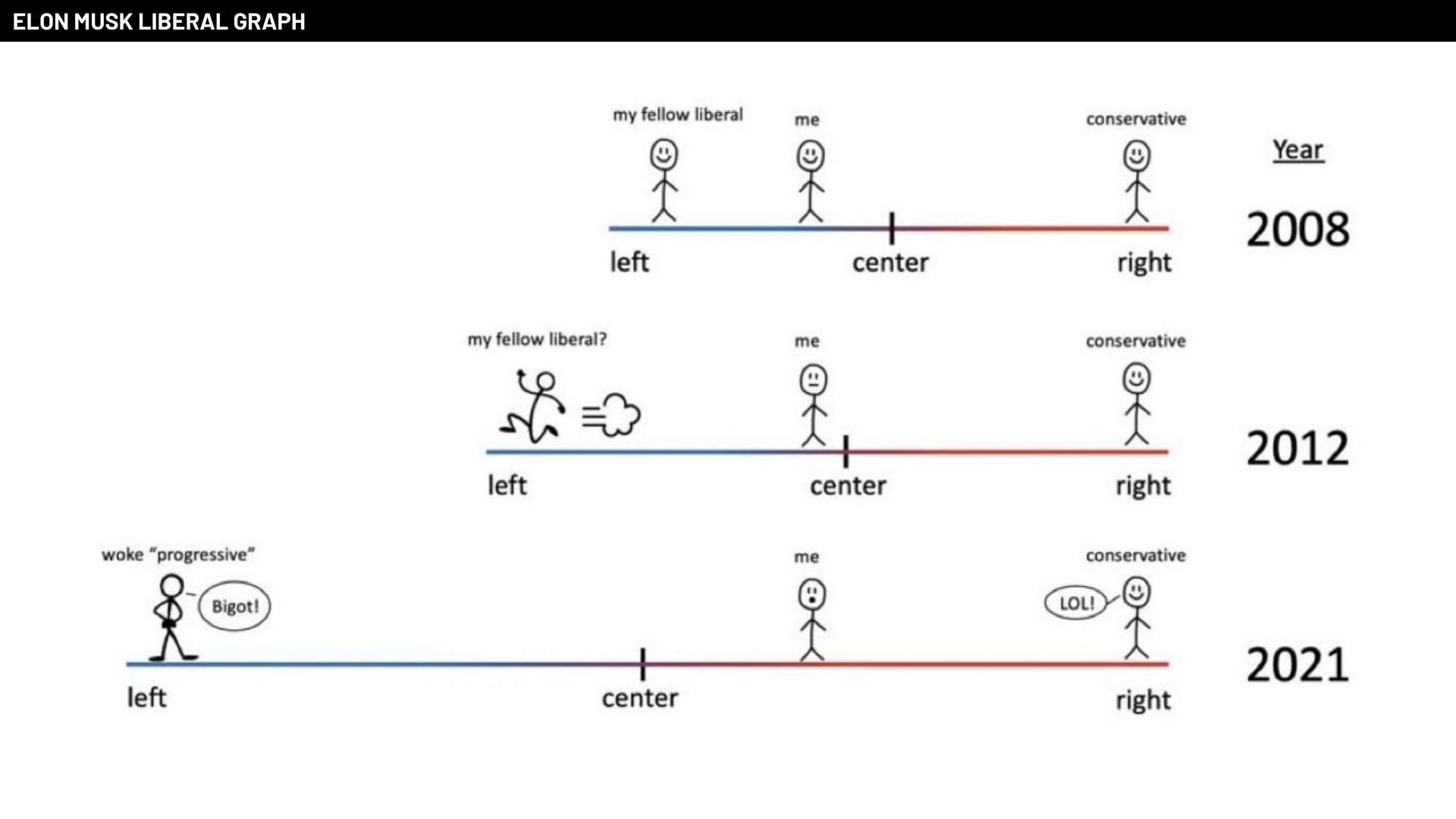 I used Infegy, a text analytics & social intelligence platform, to analyze the Elon Musk Twitter conversation. First, I spent about an hour thinking about what I wanted to learn about the conversation and the audience. Then, it took me 30 minutes to build the queries, export the data and drop them into the slides.

In my opinion, Infegy has a very strong consumer intelligence offering. But unfortunately, analyst firms like Forrester won’t recognize them as a strong player for various reasons. For example, in the last two Forrester Wave Reports, Infegy and Pulsar (another strong player in the space) is not mentioned on the list.

While the Forrester Wave Report and the Gartner Magic Quadrant are good starting points when researching software for your Martech stack, they do not represent the whole universe of software providers in any given category. That is why I like to look at G2, Capterra, and Trust Radius. I also prefer to leverage my network and also request free trials. The best way to learn about software is to use it.

There are two reasons why I am fond of Infegy. The first is speed to insight. Infegy was built to provide insights without wasting time mining or filtering the data. Speed to insight has always been a priority for me when analyzing an audience, a conversation, or media coverage. Time is always of essence, and data needs to be a starting point to get the right results and insight quickly.

The second reason is their text analytics. I have tested dozens of social analytics/intelligence providers, and I’m also a power user in many of them. Infegy, by far, has the most robust text analytics offering. Even better is that they allow you to upload any custom data set for text analysis.

I would not use Infegy for tracking brand mentions or social listening. Instead, it is a research platform that can uncover actionable insights and white space in the market about an audience or an industry.

I demoed their product back in 2019, and the innovation that has happened since then blows my mind. “Speed to innovation” is a business priority for them.

When social media analysis is combined with primary research, the data is more insightful and actionable for marketing and public relations.

In this post, you will learn five ways to identify the top business media outlets for planning your PR and earned media program.

When looking to invest in a social media dashboard, you’ll need to consider 3 important factors–cost, user access and ease of use.